Varieties Tea In The World

These are very delicate, elegant and gentle teas. Popular white teas include Silver Needle and Bai Mudan. White tea can be produced in areas including Nepal and even Yunnan, a region best known for pu’erh teas.

Green teas require more steps to process than white teas, but less oxidation takes place. That is why the leaf itself remains green. Popular Japanese greens include Sencha and Matcha. Well-known Chinese green teas include Longjing and Bilouchin. The flavors of green tea covers a wide spectrum from buttery and grassy to smokey, and even savory.

Oolong is the most complex type of tea to produce. The best oolongs come from both Taiwan and China. The flavor of individual oolongs teas differ greatly. They range from sweet and misty honey to a milky creaminess and bold roasted flavors.

Black teas are perhaps the most common on the market. Darjeeling, Assam, Ceylon, and Keemun are a few of the most well-known. These teas are heavily oxidized and brew up strong and bold. Black teas is the base of many popular tea flavors such as Earl Grey.

Pu’erh is a fermented tea from the Yunnan province in China. There are two styles of this tea based on production: raw and cooked. Flavor and color are usually light while others can be dark and intensely earthy. 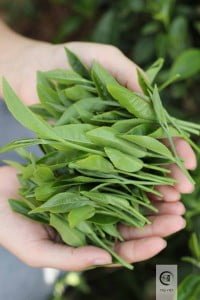 Camellia sinensis var. assamica are used for tea processing in Vietnam. Depending on environment and harvesting, trees can ultimately grow to a height anywhere between five and fifteen metres (16 to 49 feet). You can find areas of tea trees in the northern provinces of Ha Giang, Lao Cai, Yen Bai, Son La, Lai Chau, and Dien Bien.

Although families would have originally made their own tea but it is now more common for the harvesting of leaves to be a separate practice from the processing of tea. Then they sold freshly leaves to small artisan producers or to collecting agents for the larger factories.

People have expertly made shan tea. The attraction of shan tea is the bio-diverse and chemical-free origin of the leaves. The added complexity and depth of deep-rooted trees, broad leaves, and the slow growth typical in mist covered mountain conditions also make shan tea become so special.

For tea drinkers in particular and Vietnamese in general are familiar to Shan Tea. The ethnic specialty is the target of tea lovers, artist or the rich. There are many types of Shan Tea

Vietnamese Snow Shan Tea is only in the Northwest Highlands. There are many kinds of tea such as Suoi Giang Ancient Snow Tea, Ha Giang Snow Tea, Ta Xua Snow Shan Tea. The name of shan snow tea originates from the pure white mantle on the tea bud. Because of the pure white tea buds, we also call it White Tea. The tea leaves are larger than Thai Nguyen tea buds and smaller than Bao Loc one.
The color of the tea is naturally clear, usually white gold or beige. Tea smells early grass, feeling fragrant and slightly cool . The tea is not also quite bitter

Shan tea is actually TRI777 tea. This tea is quite also popular in our country. TRI 777 Tea is derived from Northwest Shan Tea. Then Sri Lanka bred it to become a new, more powerful tea. This tea is also cheaper than Shan Snow Tea due to its commercial feature.