Cinnamon is popular ingredient to spice up your dishes. You can also use it to make a rich and tasteful tea. This tea has many benefits due to its vitamins and minerals. Cinnamon tea is a good way to relax your body with its slightly spicy flavor and inviting aroma. In addition, cinnamon tea will be better when drinking hot. Hot cinnamon tea benefits are so popular, especially for health. 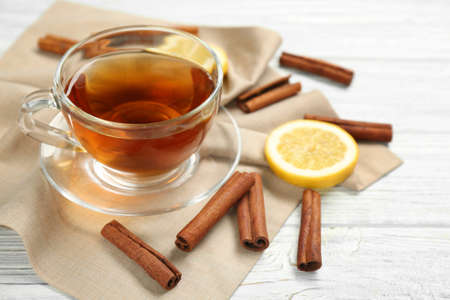 When the weather is cold and there are cold vapor, many people are not aware of the cold and cough, sore throat and runny nose. Try a cup of hot cinnamon tea is very helpful for you. It brings feelings relaxed, pleasant to enjoy. Drinking heavy, spicy or light tea is up to your interest. You can also add honey and lemon to extra the favor of cinnamon. We will give you some cinnamon tea benefits.

Regularly drinking cinnamon tea can reduce the amount of insulin, also blood sugar.. If you are fond of eating sweets, this spicy tea also can help you. Two cups of hot cinnamon tea per day; and the results will speak for themselves!

Cinnamon is popular in supporting proper blood circulation. Poor blood circulation can affect the body in many ways such as constipation, joint pain… However, the effect of hot cinnamon tea can “dislodge” the potential harm. It helps heat body, naturally dilute blood and increase blood flow.

Do you feel uncomfortable when your hands, feet are always cold? Do not worry! A cup of hot cinnamon tea can dispel the cold. And you will feel comfortable and strong. At the same time, the effect of cinnamon tea also eliminates the risk of colds and some other health problems.